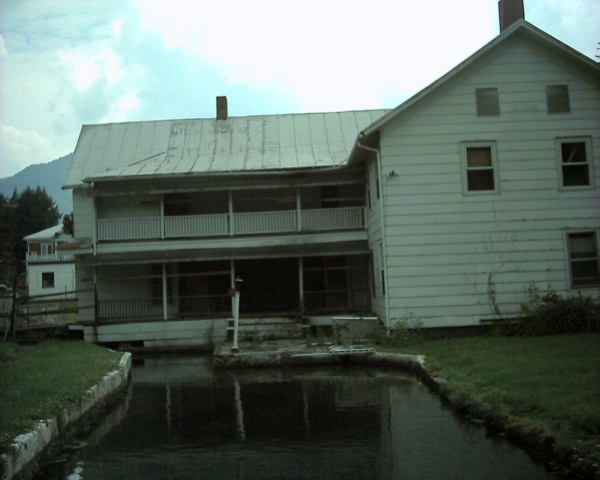 As I grew up here in the wonderful world of Hampton Tennessee, I was exposed to many things, good and bad, but in life you must take the good with the bad. One thing I can say is that my childhood memories are filled with many great and historical sites where I played as a boy. One of the most important and most memorable places was the old Willow stream House. It was located directly accross the road from one of the two churches I attended regularly in my youth, the Hampton Christian Church. Not only was it one of the places I attended to learn the ins and outs of religion and spirituality, it was also the place where all of my Boy Scout meetings were held. Yes, believe it or not, I was a Boy Scout and I was a damn good one at that. So needless to say, I spent alot of time there. This meant that every day I was there for Sunday School, Prayer Meeting, or a Boy Scout meeting, directly afterwards I went running to the pond accross the road to see the huge trout in the pond at the old Willow Stream house.

The house got its name from a huge Weeping Willow tree that grew out front and hung over the strem and pond. It cast a great shadow accross the pond which helped keep the cool water that flowed out of the ground from Hamtpon Springs even cooler. It was a great enviroment for those beautiful trout which came running at the site of a person in hope of catching a tasty morsel of Purina Trout food from anyone willing to feed it to them. All of us would stand in amazement as we watched these fish swim by, some seeming to be monster fish to us. Keep in mind we were kids, and all we wished for was the time the day would come that we would catch a fish just like one of those in the old pond.

As I stated earlier, the good comes with the bad. It seems the bad this time is the end of the old Willow Stream House. It is scheduled to be demolished in order for the Hampton Water Department to have land in case the need arises for the construction of a water treatment facility. The tree is gone too, fallen many years back. I have taken the time to stop by and take a few pictures and I will be adding more as time goes along. It would be easy for me to say I hate change, but I don't. It would also be easy for me to say that I think that this shouldn't happen, but I do not feel that way. The house does need to go. The flood in the 90's damaged the house to the point of no return. It would cost well more that it would be worth to attempt repairs. We also need this water treatment facility in order of our community to cope with the increase in population. So, change it is. Come back here to see the pictures, and maybe even video as I get it: